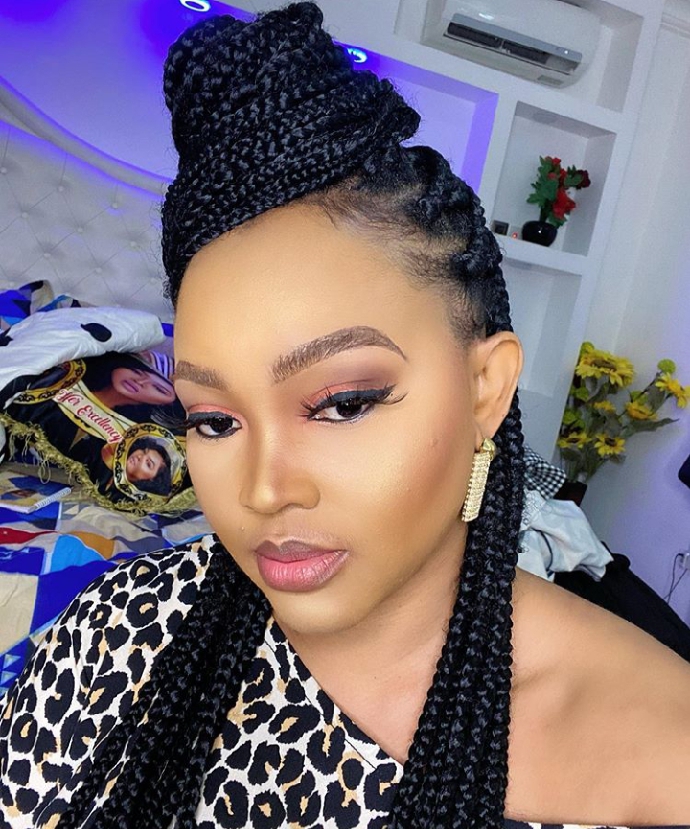 Aigbe made a confession accompanied with an electrifying smile all over her faces saying “Don’t tell anybody o. For a very long time, I had a crush on 2baba.”

The Nollywood actress also expressed her experiences and admiration for the industry’s veterans like Liz Benson and Sola Sobowale.

“Coming into the industry, there were two people I admired a lot— Liz Benson and Sola Sobowale. Liz Benson was just so beautiful and she still is. I absolutely loved her back then.

“I also loved the way Sola Sobowale interpreted her roles. She inspires me whenever I see her on a movie set.”

“Before I got into the industry, I admired Sola Sobowale because she knows her onions. One day, I got a call to come on set for a movie titled, ‘Ohun Oko So Mi Da’.

“The movie was produced by Aunty Sola and I was shivering when I got to the set. I asked myself, ‘Would I be able to act in the presence of my role model?’

I went to a corner and prayed to God and told myself, ‘This is my opportunity. I shouldn’t allow Aunty Sola to overshadow me. I should let my star shine.’

“Unfortunately for me, in that particular scene, I wasn’t meant to talk at all. I acted the role of her husband’s secretary and was dating her husband.

She came to my character’s house to warn her.

“I was not supposed to say anything but I thought that as an up-and-coming actress, she would just kill my ‘star’ if I didn’t say anything.

Guess what I did. I gave myself lines. As she was ranting, I was reacting to her rants.

When she held me, I put my hands inside her brassiere. She just told the director to end the scene at that point, asking where they found ‘this kind of girl’.”

Aigbe also highlighted the impact of her mother towards her career upsurge by saying;

“I learnt being dogged from my mum. She is a very strong woman, who never gives up. She is very consistent and hardworking.

I believe that whatever one wants to do, one has to keep at it until one succeeds.”

After Years Of Miscarriages, One Ailment To The Other, My Sister Delivered-Ini Edo Laments.

Photos: I Am Not Led, I Lead Nengi Say’s When Holding A Sword

Laycon allegedly in a secret romantic relationship with BBNaija’s Lilo

Tell Us What You Think Here Cancel reply

Eno Barony – Had I Known

I’m attracted to Nengi because of her smartness – Laycon breaks...